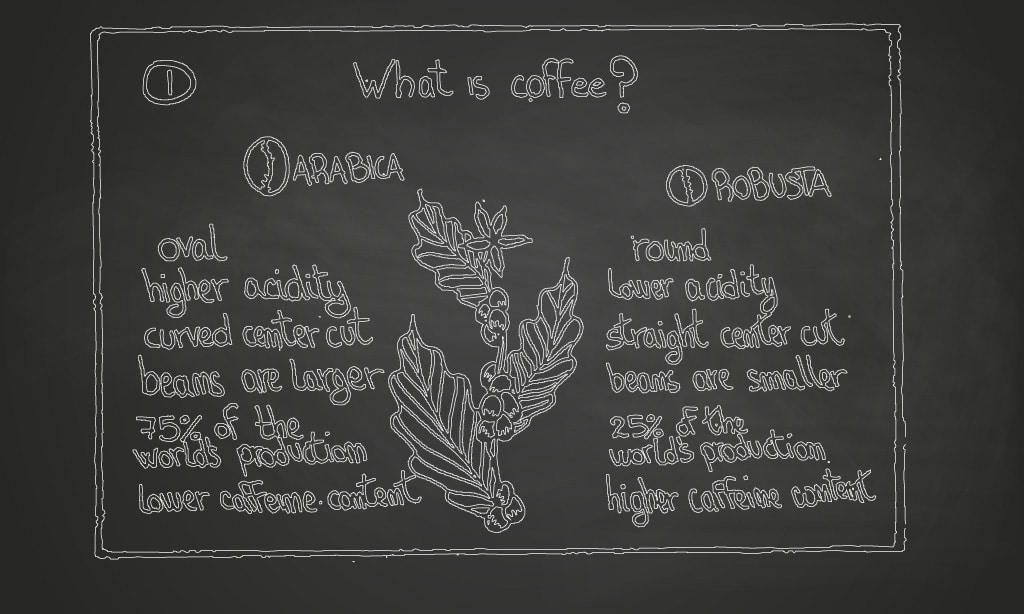 You already know it? Lucky guy!
I should know as well because coffee is my job, my profession and my passion. But to be honest there exists so much information about coffee I didn’t know before. So let’s dive deep in the first part of the coffee story and let’s explore the root of coffee.

Coffee is a plant, the official name of this genus is Coffea.
This genus has a huge variation of genera and species. Known are more than 500 genera and over 6000 species.
The coffee plant (coffea) grows as a tropical tree or as shrubs.

The coffea can grow to more than 30 feet (9 meters) high but normally the trees are pruned in order to keep their energy and it is easier for harvesting. Each tree is covered with waxy, green leaves growing opposite each other in pairs. 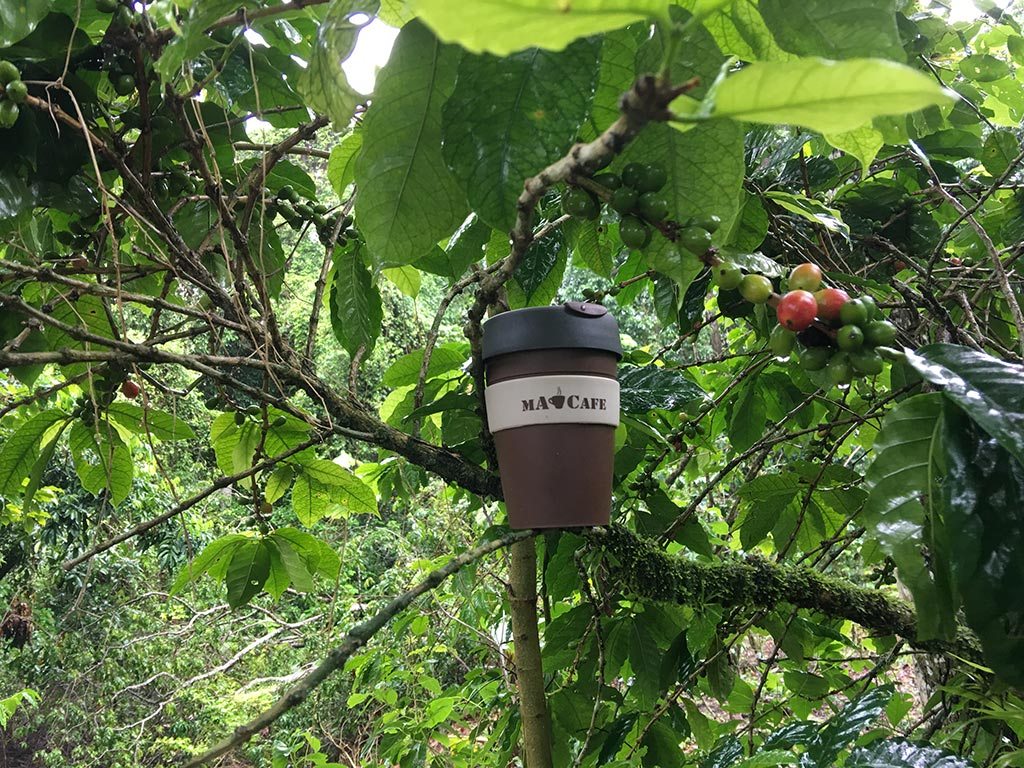 The fruit which is harvested is a seed and is normally called coffee bean. Although it is a common expression it is wrong. The fruits are stone fruits, therefore it is correct to call them coffee-cherries or coffee-berries. The reason they are often called beans is their look inside the coffee-cherries. The cherries contain two stones, looking like real beans. Sometimes they contain only one stone, but that is only a small percentage. These special coffee-cherries, or coffee-berries are called peaberries. There’s a belief that they shall have more flavour then paired beans, but this belief is scientifically not proved.

The Anatomy of a Coffee Cherry. 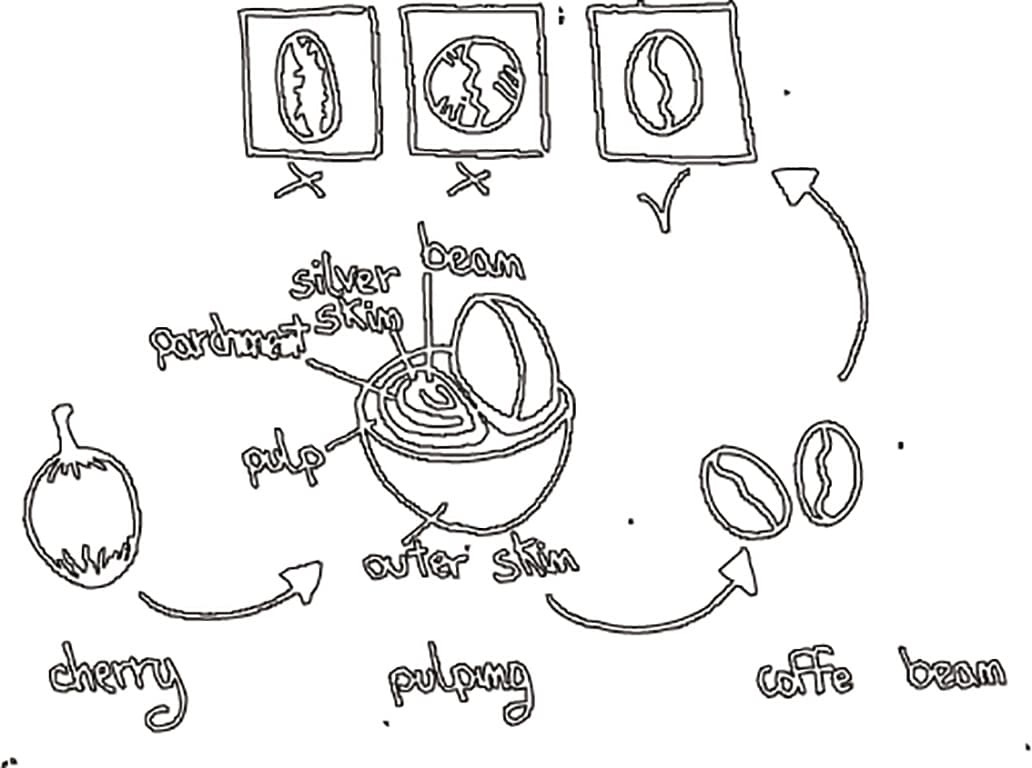 The coffee cherry consist of several layers:
The outer skin, called the exocarp.
The mesocarp, a thin layer of pulp
The parenchyma a slimy layer
The endocarp, a paper-like envelope, also known as parchment
The spermoderm, a skin around the seeds (beans) commonly known as silver skin

Coffee cherries grow along the branches of the plant. The plant grows continuosely and therefore you very often can see flowers, green fruit and ripe fruit next to each other.
The time for maturing is about one year after first
It takes nearly a year for a cherry to mature after first blooming. The full production capacity is reached after about 5 years of growth. The plants can live up to 100 years. They reach their peak time in being most productive between the ages of 7 and 20. A coffee tree produces about 10 pounds of coffee-cherries a year in average, this equals about 2 pounds of green coffee-beans.
These figures depend on the way of cultivating, the soil and maintenance.
The most productive environment for coffee-plants is in between the so called Coffee Belt. Here they have what they need: Rich soil, mild temperatures, frequent rain and shaded sun. 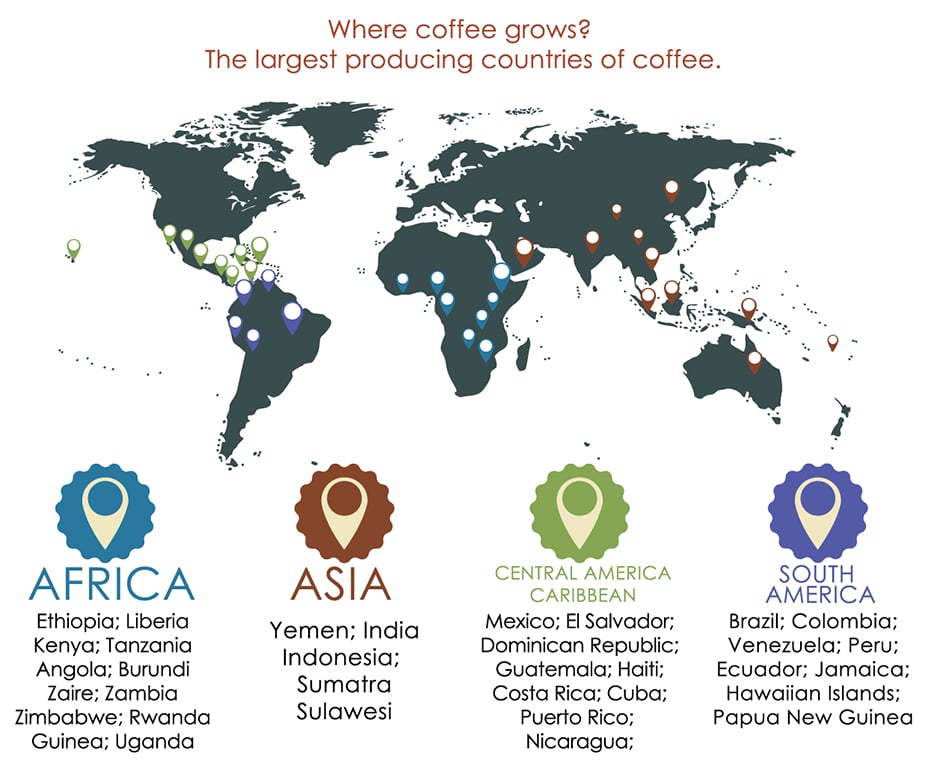 Of course there are a lot of myth about coffee, the reason is it’s success and popularity.
One of the legends is that it’s origin is Ethiopia and was discovered by a goatherd named Kaldi. He shall have recognised that his goats once fed coffee-cherries and then turned like drunk or crazy. He discovered the plant and tried it’s fruits and felt liven up. I don’t know if it’s true but it is possible. In the Arabic countries people don’t drink alcohol for religious reasons but they drink really strong brewed coffee which shall have a similar effect.

Since here we’ve learned a lot about the plant. I could go on deepen this chapter, I could describe the classification and variations but that would be overkill and not in the scope of the coffee story. I’m sure you agree that we wan’t to concentrate on the coffee plants that are important for commercial use.

There are two important coffee species — Arabica and Robusta. 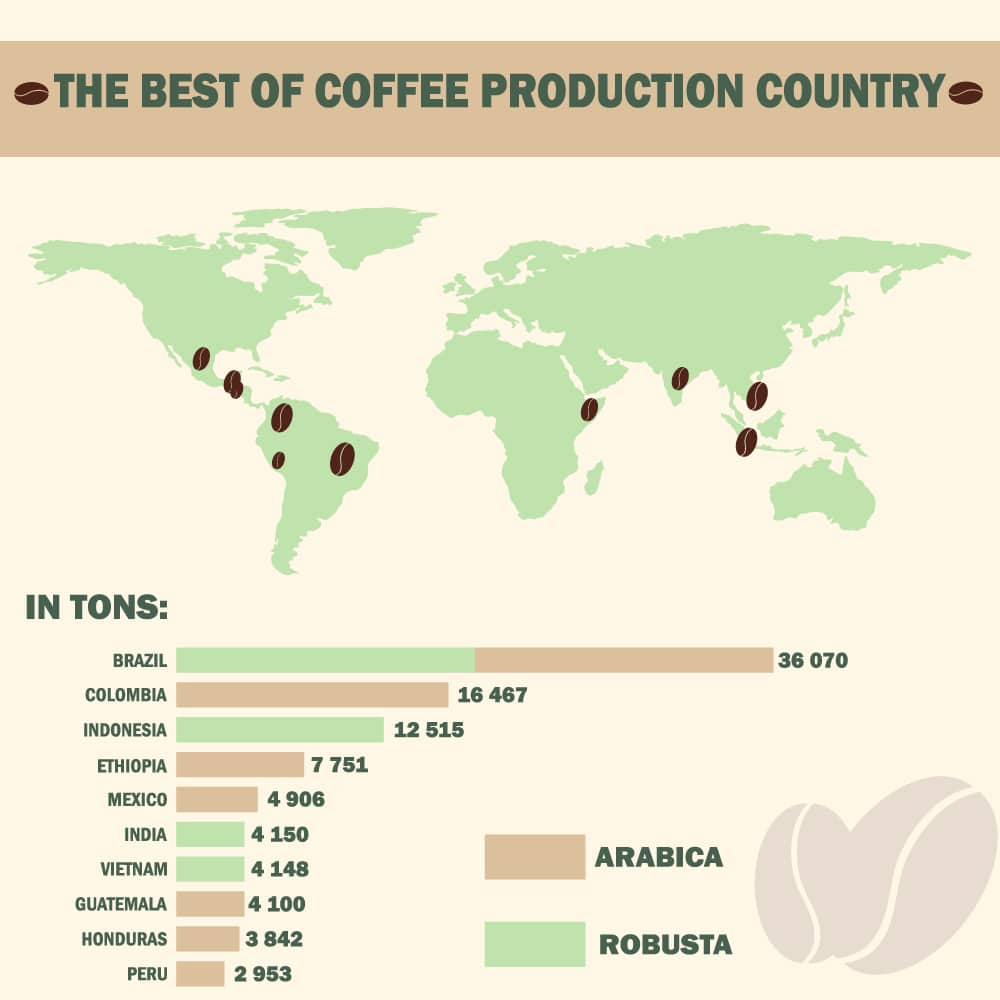 Coffea Arabica is descended from the original coffee trees discovered in Ethiopia. These trees produce a fine, mild, aromatic coffee and represent approximately 75% to 80% of the world’s coffee production. The beans contain about 0.8–1.4% caffeine.

On the world market, Arabica coffees bring the highest prices. The better Arabicas are high grown coffees — generally grown between 2,000 to 6,000 feet (610 to 1830 meters) above sea level — though optimal altitude varies with proximity to the equator.

The most important factor is that temperatures must remain mild, ideally between 59 – 75 degrees Fahrenheit, with about 60 inches of rainfall a year. The trees are hearty, but a heavy frost will kill them.

Arabica trees are costly to cultivate because the ideal terrain tends to be steep and access is difficult. Also, because the trees are more disease-prone than Robusta, they require additional care and attention.

Most of the world’s Robusta is grown in Central and Western Africa, parts of Southeast Asia, including Indonesia and Vietnam, and in Brazil. Production of Robusta is increasing, though it accounts for only about 20% to 25% of the world market. The beans contain about 1.7–4% caffeine.

Robusta is primarily used in blends and for instant coffees. The Robusta bean itself tends to be slightly rounder and smaller than an Arabica bean.

The Robusta tree is heartier and more resistant to disease and parasites, which makes it easier and cheaper to cultivate. It also has the advantage of being able to withstand warmer climates, preferring constant temperatures between 75 and 85 degrees Fahrenheit, which enables it to grow at far lower altitudes than Arabica.

It requires about 60 inches of rainfall a year, and cannot withstand frost. Compared with Arabica, Robusta beans produce a coffee which has a distinctive taste and about 50-60% more caffeine.

There are hundreds of further coffee-plants but as already said, I omit them. And being honest, until here it is yet a lot of stuff to remember.

We’ve discovered that coffee is a plant, called coffea. What we commonly call coffee is a seed from the coffee-cherry. We’ve seen the anatomy and know the different layers. We learned the plant’s history and the myth about the discovery. We know that there are two important species Arabica and Robusta.

The next chapter deals with farming. We will learn more about the plants but with a special eye on the environment, processes and the people.

I hope you like what you’ve read so far and I’m looking forward to your comments.